Summary: Paul Dini’s Jingle Belle comes to Top Cow in a special ‘Halloween collides with Christmas’ one-shot written by Dini and drawn by Stephanie Gladden (Powerpuff Girls, Chowder, Hopster’s Tracks). In years past, Santa has triumphed over a variety of enemies including the Devil himself. Now, St. Nick gets ready to face his greatest challenge ever in Jingle Belle: Santa Claus Vs. Frankenstein! Inspired by Mary Shelly’s original novel (sort of), the story of Frankenstein’s monster takes a new twist when he is found by Jingle in the Arctic wastes and ‘rehabilitated’ to fit in with the elves at Santa’s Workshop. All goes well until an ultra-PC city declares Santa Claus taboo and awakens Frankie’s monsterous side in an misguided attempt to help his friend. It’s up to an ailing Santa and a reluctant Jingle Belle to stop their monstrous ‘apprentice’ before he destroys the town and ruins the reputation of Christmas forever!

Sorry this is a bit late, but I figured what the heck it’s Christmas and did another recap of one of my favorite holiday/horror related comics. Jingle Belle is a series of different comics about the misadventures of Santa Claus’s bratty but well meaning teenage (by elf years) daughter. Hey, just because your dad’s Santa doesn’t mean you’re a little angel. Her best friend also happens to be the official Halloween witch.

Unfortunately, I only own two comics starring Jing, this one and one involving her uncle Krampus. I’ll save that one for next year.

[Wing: KRAMPUS. I’m excited for next year, and for this one.]

Councilwoman Thelma Peake of the town of Autumn Falls has recently begun lobbying against the image of Santa Claus, to the point she’s even denounced him as a menace to society. And it looks like her views are spreading beyond the small town. Thelma rationalizes Santa’s a modern version of a Christian saint, therefore he can’t be used on public property. She claims Santa doesn’t have the authority to determine which child is naughty and which is nice, saying it does irrevocable damage to a child’s self esteem and that all are deserving of gifts. She paints Santa as a cruel taskmaster who treats his reindeer and elfin workers like slaves. And she views him as a grossly misshapen figurehead of gluttony in an era where child obesity is at its worst.

The only person in the crowd willing to argue against Thelma is Polly Green, the official Witch of Halloween and BFFs with Santa’s daughter, Jingle Belle. Armed with a sign that reads “SAVE OUR SANTA” and with her dog Watson in her arms, Polly tries to counter each of Thelma’s points.

[Wing: And what about the whole religious aspect, Polly? What about that? Santa shouldn’t be used on government property, at the very least, and public property is pushing it.]

Thelma ignores Polly’s counterarguments, pointing to her, “Autumn Falls’ own claim to holiday shame,” [Wing: HEY NOW. Polly sounds delightful.] as the only person speaking on Santa’s behalf as proof of how awful Santa is. The moment Polly plans to retaliate as Thelma makes snotty threats, Thelma whips out her lawyers before Polly can say “Abracadabra.”

Santa and his wife, Mirabella Claus, are watching Thelma’s statements on TV from their home in the North Pole. Mirabella tries to be supportive of her husband, reminding him this isn’t the first naysayer they’ve dealt with. Santa feels it’s more than that, citing the odd grinch here and there is nothing compared to a growing national movement, and he wonders how their message of wanting to reward a few kind souls managed to get so hopelessly warped. [Wing: Religion, generally.]

Santa tries to take his mind off the anti-Santa message by checking out the workshop. Manager Rosetta explains everything’s going smoothly in most of the toy departments… except for sock monkeys. Santa’s not surprised when he remembers who was in charge of that particular area.

Jingle Belle is out snowboarding through the North Pole rather than working, singing her own praises as she performs stunts with some help from the local fauna. After all, what’s the point of being 151 (16 in elf years) if you can’t have some fun now and then? But the moment Jing lands her board on the ground, she falls into a deep icy cavern. And what’s more, she’s not alone. 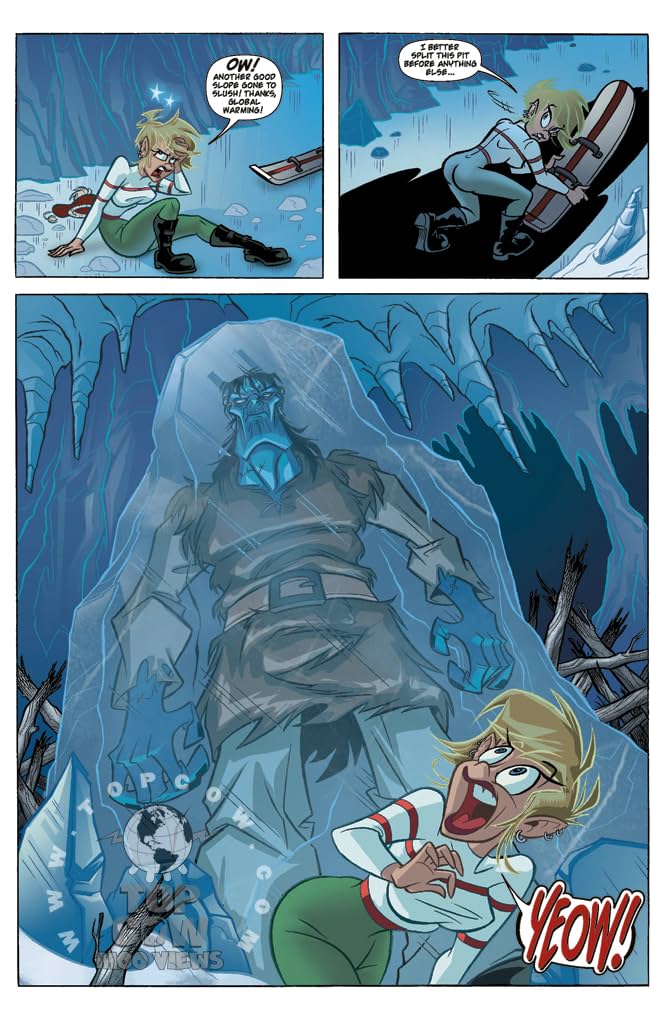 Getting over her initial fright, Jing realizes the person inside the ice is still alive, and begins chipping away to free him using her snowboard. Once freed, Jing’s new friends eloquently describes how he was born an abomination, and attempted to end his miserable life upon a self made funeral pyre. Alas, the fire melted the snow he fell underground. Jing helps him out of the cave, and in the sunlight she notices for the first time he looks familiar…

Having finally recognized her new acquaintance as Frankenstein (a name, the monster admits, he would’ve gladly taken had his creator/father blessed him with it), [Wing: BEST ANSWER to people calling the “monster” Frankenstein.] and bonding over their respective parenting issues, Jing brings Frank back home. In Jing’s room (with Polly having stopped by), Frank is shown a bevy of toys, models, and action figures crafted in his likeness, shocking him to think a visage as ghastly as his is one used for the enjoyment of children. Polly sees Frank’s existence as proof Mary Shelley’s “Novel” was actually based on eyewitness accounts. Jing also thanks Polly for trying to stick up for her dad, which Polly waves off as solidarity between holiday icons. She then asks what Jing plans to do with Frank, but Jing’s got some ideas…

Santa’s not exactly thrilled at the idea of having Frankenstein’s Monster working in his toy shop, but Jing pleads their case by pointing out Santa’s got elves and elf-like characters from practically every culture in the world, menehunes, peris, brownies, yumboes, etc., making toys for kids. Santa doesn’t see the connection until Jing reminds him they always have trouble finding volunteers to make monster toys for the weirdos, freaks, and Goths. “You know, the fun kids.” [Wing: JING. You are my new favourite.] Frank shows Santa some toys he’s created as an example of his skill inherited from his dad, and Santa is indeed impressed, especially by the creative blood effects and use of “Paint.”

Narration goes over to Frank, detailing how thrilled he is to be working for St. Nicholas, and in a place where his artistic sensibilities and talents are truly appreciated. When he’s not working, Frank enjoys playing ice hockey on Jing’s team. [Wing: ICE. HOCKEY. I love Jing.] Though there are a couple of complaints. For starters, he’s not completely thrilled to find out most media portrays him as a shambling idiot.

And he’s really concerned with how despondent Santa’s getting over Thelma Peake’s Santa Ban Movement. While Santa feels hopeless on the matter, Frank decides someone should do something on his behalf. Plus, speaking from personal experience, Frank knows what a buzzkill torch wielding mobs can be. Taking matters into his own hands, Frank dons a Santa costume and constructs a tricked out super sleigh. Jing has some reservations about this plan (and coming from her that’s REALLY saying something) but goes along with Frank anyway. After all, just because an idea’s bad doesn’t mean it’s not worth doing. [Wing: Well, that’s one philosphy.]

In Autumn Falls, Thelma has declared the Ban Santa Movement has reached out towards nearly the entire nation, and they’re on the verge of banning Santa for good when who should arrive but “Santa” and some blonde chick. The moment the real Santa sees this on TV he zips out of the North Pole. Thelma (who obviously can NOT tell this is Frankenstein’s Monster) orders “Santa” to leave saying he’s not wanted. Santa Frank asks they discuss things like civilized human beings over an exchange of well wishes and gifts… unfortunately, Frank brought a bag filled with monster toys, causing Thelma to faint the moment she sees them. The crowd thinks Thelma was right, Santa IS a monster, when the real guy in the red suit makes his triumphant appearance. Jing sees an opportunity to set things right, declaring how wonderful it is that Santa, even as the world tries to shun him, has arrived to save Christmas from a monstrous impersonator (let me just point out she’s not actually trying to throw Frank under the bus). Frank, good sport that he is, plays along and starts screaming “SANTA BAD!” [Wing: HULK SMASH.]

Santa and Frank engage in a fake fight that would make the WWE proud, [Wing: I would pay good money to watch this. And, in fact, am somewhat surprised I haven’t heard about the WWE doing this. If you know about one, let me know.] and Rudolph “Subdues” Frank with a blast from his nose.

On the sidelines, Thelma comes to and Jing asks, victim to victim, what her real beef with Santa is. Thelma admits she doesn’t have anything against the man personally, but he’s an easy target and the best way to jumpstart a career as a political crusader is by going after somebody famous who won’t fight back. [Wing: Oh, lord, this is going well. There are perfectly valid complaints about Santa appearing everywhere. So glad this comic doesn’t dismiss them all as a grab for political attention — oh wait.] Jing gets confirmation that Thelma was really willing to ruin the holiday season for millions of children in order to be famous.

With that settled, Santa’s public approval ratings have immediately skyrocketed thanks to Thelma’s confession and his defeat of the “Monster.” And hey, all the kids are now asking for monster toys!

Come Christmas Eve night, Jing’s wondering why Frank’s not at the office party when Frank reveals he’s heading on for greener pastures. Why? Well, now we know what he was doing on his breaks.

They make such a beautiful couple.

I really need to add more to my collection of Jingle Belle comics, but thankfully they’ve finally been collected into one edition.

I’ve read a couple of reviews that said this provides a more broader focus of Jing’s world than simply focusing on Jing herself. God knows I love Polly and wish she got her own spin-off.

[Wing: This is delightful and wonderful (and a little bit frustrating). I’m keeping an eye out for that collection, because Jing is a delight.]