Title: To Grandmother’s House We Go

Summary: A woman poses as her dead friend to claim a 500 billion yen inheritance

I haven’t done a Takahashi recap in over a year since “The Laughing Target,” but hopefully this tale’ll be less problematic.

“To Grandmother’s House We Go” was reprinted under the Rumic Theater banner instead of Rumic World. Specifically it was collected in the One Or Double collection translated in English by Viz Media.

This is a slightly comedic horror story about a young woman who, extremely reluctantly, agrees to pose as her dead best friend to collect said friend’s vast inheritance. Along the way, the girl receives some help from an extremely unexpected ally. This is unfortunately one of the many stories that didn’t receive an anime adaption, but it’s still one of my faves.

END_OF_DOCUMENT_TOKEN_TO_BE_REPLACED

Summary: Yuzuru was an average teenager who had almost forgotten that he was betrothed to Azusa when he was only 6! Now arriving to claim what she feels is rightfully hers, only Satomi (Yuzuru’s current girl friend) stands in her way… and with the mysterious and frightening powers that Azusa brings, Satomi won’t stand in her way for long!

Just because “Mermaid Saga” is over doesn’t mean I’m done with Rumiko Takahashi, which is why I’ve picked another of her earlier horror works for February and Valentine’s Day.

“Laughing Target” is a one-shot story from 1983, not as well known as her other works, but still a prominent example of her solo stories. It was one of the most highly promoted of the “Rumic World” banner, and one of the three solo tales adapted into an OVA.

Please keep in mind I have NO idea how I’m able to type the following information with a straight face, as this is the first time I’ve ever had to use the word “Yandere.” God I’m a nerd.

END_OF_DOCUMENT_TOKEN_TO_BE_REPLACED

Wow, so we’ve reached the final “Mermaid Saga” story to recap. My first completion of an entire series for Devil’s Elbow.

Unfortunately this last chapter is devoid of Mana, so Wing I hope you enjoyed her presence in the last recap. We’re looking at another exploration into Yuta’s past, this time a couple of hundred years after “The Village of the Fighting Fish.” It’s here Yuta has an encounter with a different kind of immortal, but without any romantic overtones. It’s still pretty heartbreaking though.

[Wing: I can’t believe that we’re already done with this series. I’m going to miss it, and Mana, quite a bit.]

END_OF_DOCUMENT_TOKEN_TO_BE_REPLACED

So we’ve reached the last of the stories that feature Yuta AND Mana. The following, which will be the last recap, takes place during Yuta’s past.

I’m not sure how to feel about this because we get a glimpse at what happens when Yuta gets too close a normal human, but unlike with Rin it wasn’t cut off soon enough.

Unfortunately, the story tends to cut back between the present day and the past a LOT, which can be jarring while trying to recap. I apologize if it causes any confusion.

And of course Mana continues to be a badass and a delight.

END_OF_DOCUMENT_TOKEN_TO_BE_REPLACED

It’s a good thing I chose this chapter for July because I’ve been incredibly backlogged the last couple of weeks ever since I got sick around Independence Day.

Dream’s End is another oddity in the series because it provides more world building, even though it’s the shortest story at only 22 pages not counting the splash title page. It’s the only time the series explores the concept of the Lost Souls beyond their typical usage as a plot device and warning against consuming mermaid’s flesh. It also has a bit of a “Beauty and the Beast” vibe.

END_OF_DOCUMENT_TOKEN_TO_BE_REPLACED

We’ve come to one of my favorites in the series, but it’s sad because this story’s never gotten an animated adaption.

We’ll also be visiting another twisted sibling dynamic like the Kannagi Sisters from “Mermaid’s Forest,” but this goes much differently than you’d think.

There is, however, talk of suicide in this.

END_OF_DOCUMENT_TOKEN_TO_BE_REPLACED

It’s Mother’s Day, and what better way to celebrate than by recapping yet another twisted mother/son dynamic from the mind of Rumiko Takahashi?

“Mermaid’s Mask” is the last story in the series, and is almost as bloody as “Mermaid’s Scar.” It’s one of the most terrifying entries in the title, and also the saddest, giving us a villain whose sympathy is on par with Towa Kannagi.

Unfortunately, one of the main characters doesn’t have a proper name, so I’ve given her the nickname “Masako” for reasons I’ll explain in the final thoughts section.

END_OF_DOCUMENT_TOKEN_TO_BE_REPLACED

Title: Mermaid Saga Part 3-4 – The Village of the Fighting Fish

This immediately isn’t one of my favorites stories in the series. While two of the characters are pretty cool, it doesn’t really have the same horror feel as the other tales. The tone and setting comes across similar to Takahashi’s other series, “Inuyasha.”

It also seems weird she’d do a story about Yuta’s past, long before Mana was in the picture, as the immediate second tale after the opening two parts.

[Wing: It does seem like a strange choice to do a backstory so soon after the series begins.]

END_OF_DOCUMENT_TOKEN_TO_BE_REPLACED

For Wing’s birthday I’m recapping the best part of Mermaid Saga by far. I know it’s my favorite, certainly. It gets to showcase how freaking awesome Mana is. [Wing: This month is full of fun recap surprises for me. I’m thrilled!]

This is the second story besides Mermaid’s Forest to be adapted more than once, receiving an OVA in the 90s and included in the TV series from the 2000s. Personally, I feel the OVA is the better of the two adaptions, sporting rather beautiful early 90s anime art. 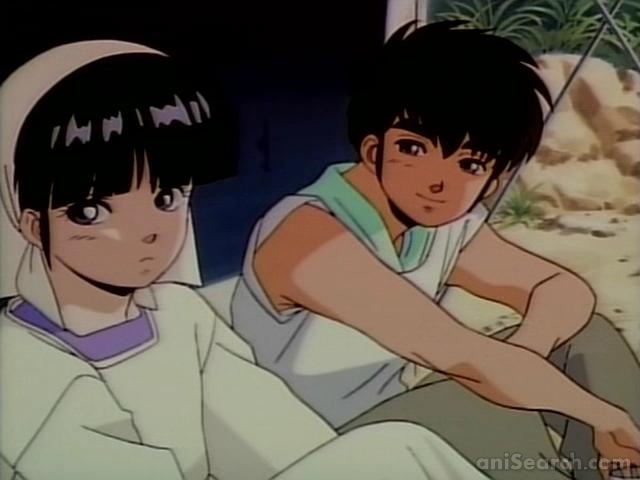 I only defer to this version when I need commission reference for Mana and Yuta.

I’ve watched the English dub, which used to be on Youtube, but you can still find the original version online somewhere. They still haven’t released it on an official DVD, but luckily I’ve got the complete soundtrack on CD. What shocked me about the dub was learning Yuta’s voice actor was Jason Gray-Stanford, who also voiced Sherlock Holmes in “Sherlock Holmes in the 22nd Century,” and was RANDY DISHER, the dorky police detective, on “Monk.”

This is also one of the bloodiest stories in the series. And, keep in mind, this is one of those stories where we, the readers, know more about what the villain is really up to before the main characters do. Also, a bit of clarification. One character never got a name in the actual story, but the OVA dubbed her “Misa,” so I’ll be referring to her by that name.

END_OF_DOCUMENT_TOKEN_TO_BE_REPLACED

Initial Thoughts: I decided to skip chapters 3 and 4 for now because that story isn’t really a horror tale, but more of an action/adventure one that takes place in Yuta’s past. I prefer the modern day stories because the past tales remind me too much of “Inuyasha” so they don’t really feel like “Mermaid Saga” to me. 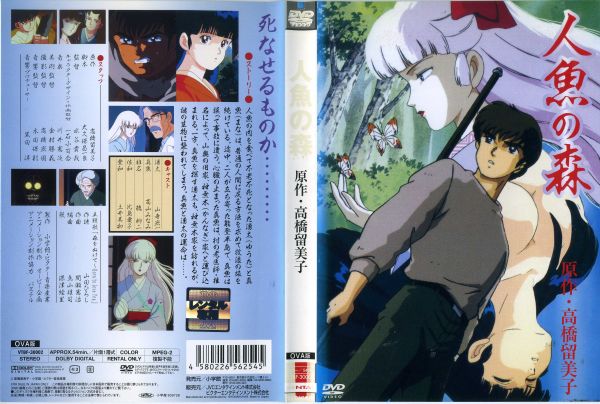 This takes place immediately after Yuta and Mana leave Cape Nosuri, and features the most visually striking character in the franchise, Towa Kannagi.

I’m gonna include scans and screencaps from the manga, the OVA, and the anime throughout this.

[Wing: I am in love with this story already, and looking forward to this recap.]

END_OF_DOCUMENT_TOKEN_TO_BE_REPLACED

Initial Thoughts: Some of you might know who Rumiko Takahashi is, or if you don’t, you might at least know of her works. She’s a longtime mangaka and creator of “Inuyasha,” “Ranma 1/2,” and “Urusei Yatsura.” She’s been writing and illustrating comics since at least the 1970s, and she’s still going. Nearly every one of her series have gotten at least one animated adaption, and most of them run for DECADES.

But today I’m here to talk about one of her more obscure titles and possibly the one oddball in her resume of titles. “Mermaid Saga” is Takahashi’s only foray into a straightforward horror series, and is relatively light on humor and love triangles unlike her other books. Which is good because it means her male protagonist isn’t an insufferable lech or an idiot.

Rest assured, the mermaids here are NOT the kind of mermaids you’re familiar with. We’re not talking about Ariel, or Darryl Hannah in “Splash,” or even the Hans Christian Andersen Little Mermaid. Mermaids in this story are monsters. Sometimes they walk on two legs, sometimes they don’t. But they are not cute, and they’re not friendly. The only way you can kill them is by chopping off their head.

Mermaid Saga didn’t get an animated series straight away. There were two OVAs (Original Video Animation, the equivalent of direct to video movies), one in the 80s and the 90s, and then an animated series in the 2000s. The one animated adaption I’ve watched in its entirety was the “Mermaid’s Scar” OVA from the 1990s, which is my favorite by far due to the artwork and the beautiful music. By admittedly, the opening theme to the anime series, “Like An Angel,” is breathtaking.

It’s one of Takahashi’s shorter series, with all the chapters collected in 4 volumes. For the sake of these recaps I’m going by each separate arc, but will include the cover art of the Viz manga collections that included the arcs.

[Wing: Okay, this sounds amazing, and I’m so excited. #killermermaidsforever]

And I’m including an MP3 of the opening theme, “Like An Angel” by Chiaki Ishikawa.